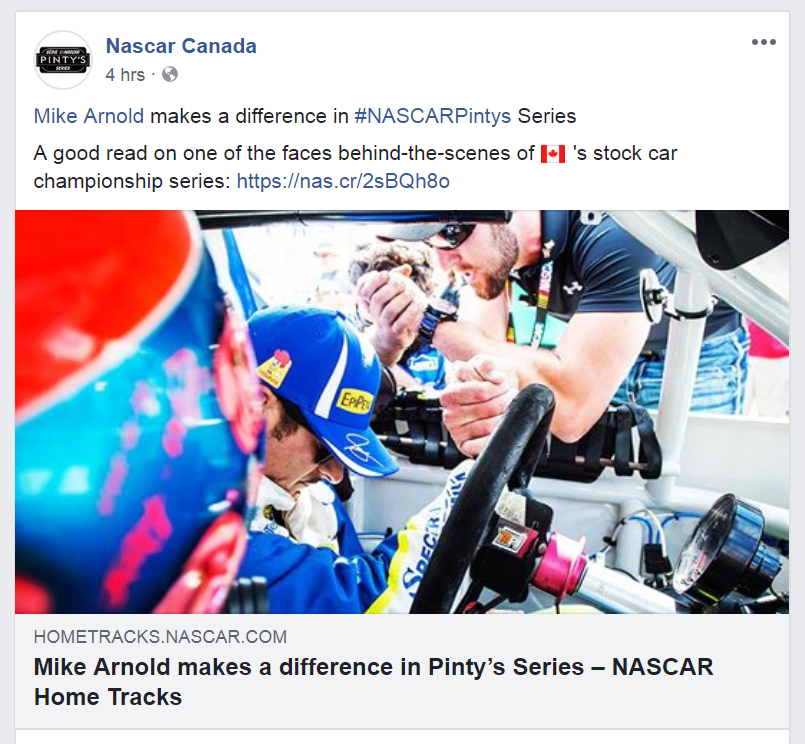 As Mike Arnold begins his fourth season as MRO chaplain for the NASCAR Pinty’s Series he spent some time discussing his ‘calling’ and role as chaplain for one of NASCAR’s nine touring series.

Arnold travels from his home in Dyer, Indiana to most of the 13 races on the Pinty’s Series schedule and is quick to explain what his roll is for the series that travels across Canada during the season.

“My official role is to provide on the spot spiritual support to the drivers, team members and all involved with the series,” said Arnold. “This includes trauma response along with prayer in 3 key aspects; at the drivers meeting, the invocation before the national anthem, and praying with the drivers at their cars on the starting grid just before the command to start engines.”

While there are obvious parts to the job people expect from a chaplain, Arnold says it’s more than just sharing a few words before the race.

“My involvement with NASCAR is not just a task list or job, but rather an opportunity to build relationships and be a friend to those who are broken and hurting,” Arnold said. “I don’t have all the answers to the questions they might have but I know the person who does and I want to point them to Him.”

While MRO is not new to the world of NASCAR, Arnold feels the sport wouldn’t be what it is without the spiritual organization.

“MRO really plays a vital role in motorsports,” he added. “MRO has been around since 1988 and NASCAR wouldn’t be what it is today without it and the faith aspect it brings to the sport.

“When you consider that NASCAR is essentially one large traveling family, think of MRO being the glue that holds it together. In an environment where the cars are not the only thing that is fast paced, we help facilitate a place of calm, of peace, of hope.”

How he got involved

Arnold formed a good relationship with former MRO chaplain Kyle Froman who served with the NASCAR Whelen Modified Tour and NASCAR Camping World Truck Series as chaplain. Arnold said he wouldn’t be in MRO today without his friendship with Froman.

“I’ve had such a great relationship with Kyle Froman, to this day he is one of my closest friends,” said Arnold. “After we met and began trading messages back and forth and getting to know one another, he invited me to go on a mission trip to Haiti – a trip exclusive to NASCAR community members. Further relationships were formed there, and shortly after, he invited me to a chaplaincy training seminar in Nashville. I never quite knew what this road ahead looked like, but I always told him ‘I’ll never tell you ‘no’

“After a few months, I got a phone call from him, and he presented me with the opportunity to take on the role of chaplain for NASCAR Canada. He told me to take a week to think about it and I said “Kyle, you know me pretty well. What do you think my answer is?” He said “I think you’re all in.” And it was settled. He made a phone call to then-director of the series, Alex Nagy, who made me feel most welcome.”

Arnold had felt the caltive role and when he was offered this position with the Pinty’s Series he knew right away that God had a hand in putting this mission together in his life.

“This is definitely, 100 percent, a calling,” he said. “I have always loved motorsports and always loved ministry. The clash of the two is a unique gift I constantly thank God for.

“I love being with these people – they’re my kind of people, and they’ve grown to be my extended family. I live and breathe racing and live and breathe Jesus. It’s the best of both worlds for me.”

Arnold owns his own landscape construction business and credits his team at Creekside Outdoor Living that allows him to serve with MRO and have a balance between both of his responsibilities.

“It’s a massive work and time commitment between my company and serving as chaplain,” said Arnold. “I’ve been blessed with fantastic management and staff at Creekside. Their dedication permits me the time to do what I do in NASCAR. God has also been faithful to provide financial commitments from people inside and outside NASCAR to make my ministry possible.”

MRO is active within NASCAR throughout North America and while the organization is larger and has a few more resources in the United States, Arnold is quick to point out that MRO is there for everyone in NASCAR.

“In the three national series, there are some services that are offered that we might not have here in Canada, but what matters most is that I have the ability to offer what MRO stands for in NASCAR – namely, a ministry of availability,” said Arnold. “Someone is always there. In whatever scenario someone finds themselves in, they have the comfort of knowing they are not alone.”

While he can’t be in Canada all the time, Arnold stays in touch regularly with many in Canada and wants it known that he’s always available.

“That’s the beauty of technology and social media, you are no longer incapable of sustaining a relationship due to distance,” he added. “There are many conversations that are happening outside of the track with members of the NASCAR community, even during the off season.

“Everyone has a story, seasons of brokenness, and unending thirst for hope. I am no different. I know the Source where that hope doesn’t run dry, and it brings me great joy to connect others with Him as well.”